In plural, the Greek word could mean “one’s own countrymen.” In old English law, one who has been without reasoning or understanding from birth, as distinguished from a lunatic, who became that way. Idiot box ”television set” is from 1959.

1670s, from Latinized form of Greek dēmiourgos, literally “public or skilled worker, worker for the people,” from dēmos “common people” + ergos “work,” from PIE root *werg- “to do.”

The title of a magistrate in some Peloponnesian city-states and the Achæan League; taken in Platonic philosophy as a name for the maker of the world. In the Gnostic system, “conceived as a being subordinate to the Supreme Being, and sometimes as the author of evil”

The Latin word is from Greek hairesis ”a taking or choosing for oneself, a choice, a means of taking; a deliberate plan, purpose; philosophical sect, school,” from haireisthai ”take, seize,” middle voice of hairein ”to choose.”

1650s, “condition of flowing,” a sense now rare or obsolete, from Latin currens, present participle of currere “to run.” The notion of “state or fact of flowing from person to person” led to the senses “continuity in public knowledge” (1722) and “that which is current as a medium of exchange, money” (1729). 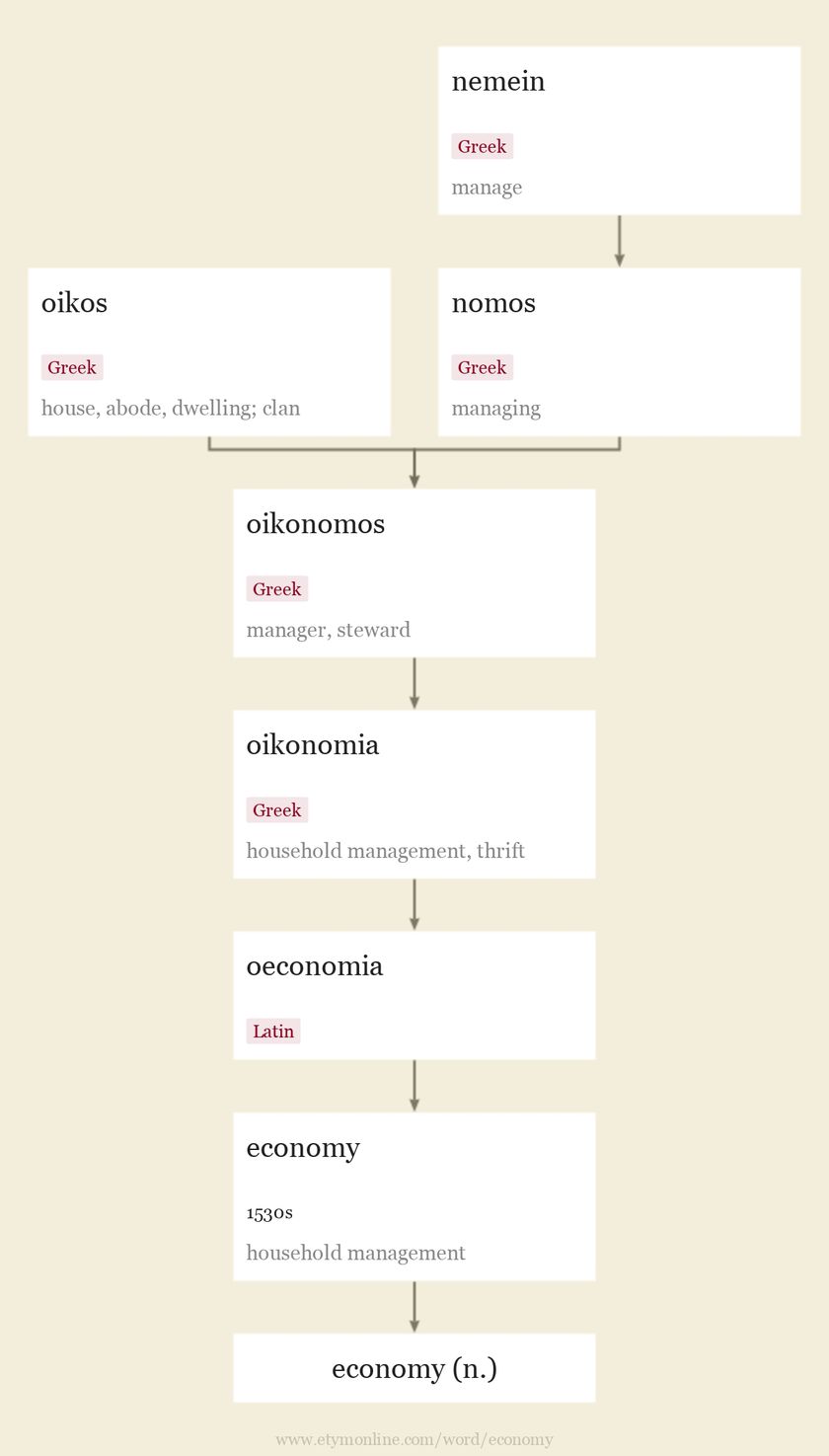 1873, oecology, “branch of science dealing with the relationship of living things to their environments,” coined in German by German zoologist Ernst Haeckel as Ökologie, from Greek oikos “house, dwelling place, habitation” + -logia ”study of.”

The ancient Greek word oikos (ancient Greek: οἶκος, plural: οἶκοι; English prefix: eco- for ecology and economics) refers to three related but distinct concepts: the family, the family’s property, and the house. Its meaning shifts even within texts, which can lead to confusion.

The oikos was the basic unit of society in most Greek city-states. In normal Attic usage the oikos, in the context of families, referred to a line of descent from father to son from generation to generation. Alternatively, as Aristotle used it in his Politics, the term was sometimes used to refer to everybody living in a given house. Thus, the head of the oikos, along with his immediate family and his slaves, would all be encompassed. Large oikoi also had farms that were usually tended by the slaves, which were also the basic agricultural unit of the ancient economy.

1530s, “absence of government,” from French anarchie or directly from Medieval Latin anarchia, from Greek anarkhia “lack of a leader, the state of people without a government” (in Athens, used of the Year of Thirty Tyrants, 404 B.C., when there was no archon), abstract noun from anarkhos “rulerless,” from an- “without” + arkhos “leader” (see archon).